For J. and me, the saga of this place began when it first tugged on our hearts and we began to spend whole mornings together over coffee, giddily discussing composting toilets, greywater systems, orchard care, the whys and wherefores of the sustainable life. For you, Dear Reader, I’ll skip to the action segments; that is, the beginning of a house.

Our plan is to build a Grindbygg, or Norwegian timber frame. The kind of timber frame that’s built by farmers, not carpenters. J. built one in a workshop at North House Folk School, built another on his own as my kiln-shed, and is confident that a full-fledged, story and a half house with strawbale walls cannot be that much more complicated. Wink. We should be able to finish in two years. Wink, wink.

Innocent of the monumental size of the task we were taking on, early this spring, before the sap began to run in the trees, we girded up our loins and began cutting trees. The site we’ve chosen is at the top of a hill filled with sizable oak and ash trees; just enough, J. has calculated, to provide the timbers for the house. All we have to do is clear the site and we’ll have the wood we need.

Feeling the ground shake as the trees hit the ground, seeing the dust swirl in the newly sunlit spot of empty air, we were surprised by a feeling of mournfulness and guilt. The logs lay like beached whales where before they had towered above the hill and swayed in the breezes. Who were we, the pipsqueaks, to fell them? We, who had fallen in love with this land for its trees?

Self-conscious of my earnestness, I began to lay my mittened hands on each trunk to thank it, to promise that we would use it well. It seemed the least we could do, to promise the trees their full use.  The trunks would be the bones of our house, most of the branches we would burn for heat, some of them we inoculated with mushrooms, and the twigs we set aside to later fuel our cookstove and use as the foundation of our garden. Even the bark and the sawdust we used to mulch our orchard. True, we would no longer tip our heads back to admire their grandeur, but, sighing, we reminded ourselves we could appreciate the trees in other ways.

When we began the job of felling the trees, the ground was the hard and frozen ground of winter. As the logs began to add up in their rows, we found ourselves wallowing and slipping in mud. We piled the firewood up in ranks. Rain began to fall instead of snow. Between the logs, hepaticas, the first flower of spring in our woods, began to bloom. Spring had come. 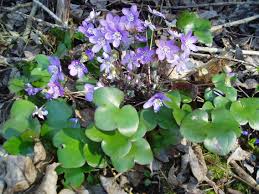 2 thoughts on “The beginning of a house”