The day dawned bright and clear, the exact day I had imagined when we first said the words “house-raising” to each other.

The day before, I had joined J. in the woods for the final preparations. In short, we had to reconstruct the four “bents” from the timbers lying like pickup-sticks all over the platform. The bents are the square arches that make up our house, each of them two vertical posts with a horizontal tie beam to connect them. We got out our collection of hand made pegs–these J. had made from dry hardwood, the theory being that if you pound dry pegs into green timbers, as the wood of the timbers dries it will shrink around the pegs and, to use the marriage analogy, become one flesh.

The sound these pegs make as they are pounded into the holes in the timbers is a treat to hear. It starts with a low thump and with each strike of the mallet the sound gets higher and higher, like plunking out a scale on a piano, until the peg is through. In the clear autumn air it seemed to reverberate for miles.

So back to the day dawning bright and clear, a miracle in itself…a sunny window between rainy days. Our friends and family started showing up early. The first ones assembled the roustabout, a winch/mini crane originally used for raising circus tents (like them, we had previously gotten rid of our elephants). J. acquired it in case we didn’t have enough labor, and turns out, if the timbers were made of pine, we would have had enough collective strength. But not oak. They’re seriously heavy. I think everyone involved was thankful for that roustabout by the end of the day.

Forgive me for waxing poetic here for a minute. As I watched that first bent rising into the air, I was surprised at the tears which sprung to my eyes. Oddly, it struck me as the identical feeling I had way back when we first began to clear the woods for our house, when J. started in with the chainsaw and the first tree shivered, cracked, and fell. It seemed appropriate that as those trees rose again, transformed, the same emotion would greet me.

That’s done. Now let me proceed with a slideshow. So many were there with their cameras, so I’ll let them tell the rest of the story with images.

Pounding in those pegs. 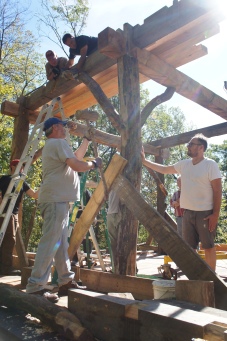 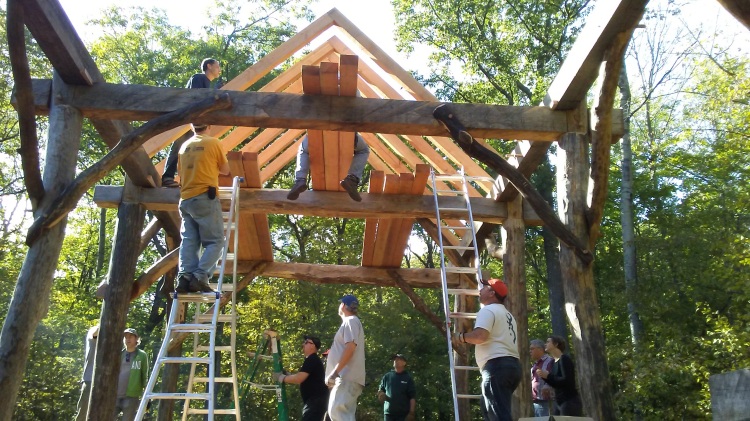 A bevy of girls goes by…

Here’s what the boys have been working on…

J. and I are not that great at community generally. We’d usually rather stick to our introverted ways and rely on ourselves than ask for help. But this experience was enough to make us rethink that tendency. In fact I’ve even caught myself thinking that every house should be built this way, touched by the hands of friends, blessed by their toil, surrounded by the community that surrounds us.

The next day as we unpacked the joy of the previous day, J. likened it to his experience of childbirth. For months he had grown this thing (outside his body) and in one long day, preceded by fear, anticipation, and anxiety, the thing came into the world, surrounded by joy and love. As the resident child-bearer in the household, I can’t say this analogy occurred to me, but J. did, in fact, nail it.

And finally, a big thank you to all who came to help. We would never have done it without you, and we wouldn’t have wanted to.

P.S. If you want to see some video of our house-raising (which this website doesn’t support), and you’re hooked up to the thing called Instagram, I posted a few on my account: the.clay.life.