The seasons have changed and the weather has cooled enough to fire the kiln again. The summer was incredibly wet, so we were a little dubious about the wood supply, which, though ample, had lain uncovered most of the summer. It wasn’t exactly growing mushrooms, but it was damp. OK, maybe there was a mushroom here and there…

I’ve heard from other wood-firers never to try to fire a kiln with wet wood. Incidentally, I’ve also often heard about potters burning their structures down. I’ve never been one to listen to other people’s opinions.

We did indeed fire that kiln with wet wood. Pine, it appears, burns no matter what, especially when split to toothpick size. After we passed 2000 degrees, it got hard to gain temperature, even with (wet) toothpick-pine. But we had some dry stovewood squirreled away, which did the trick. We got to our peak desired temperature–too hot for the thermocouple, which I withdrew at 2313 degrees, and kept stoking until cone 10 dropped, which happens, I think, around 2350.

Because night comes early in October, we were stoking by feel and by headlamp by the time we were finished. When we went up the hill to bed, we were buzzing with that curious elation that comes from working hard and accomplishing what we knew was a good job. The fire still glowed on our cheeks.

The next morning, we visited the still-hot kiln like an old friend. However, our old friend had cinders on top of its arch… Looking up, we saw that the beams of the roof were burnt. All along the ridge beam, the joists of the roof had caught fire, beginning next to the chimney. Which had been insulated, apparently not well enough. 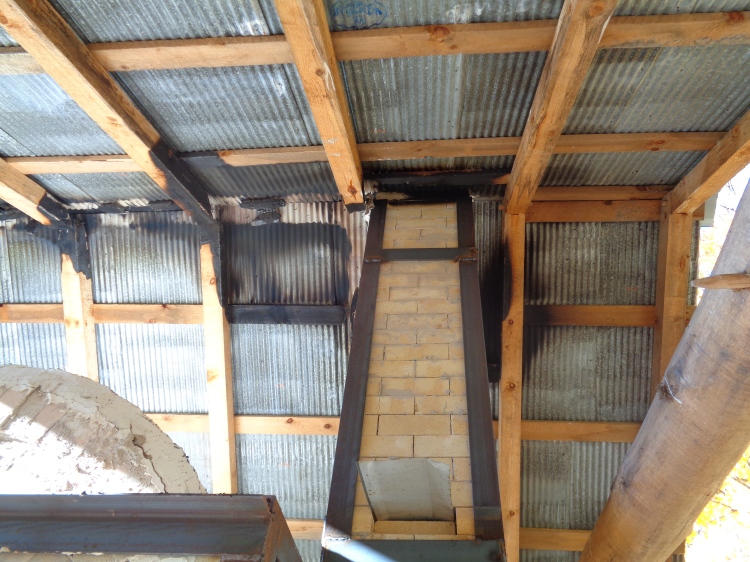 It was hard, looking up at those burnt beams, to not think of the time we had spent chiseling them by hand.

But it could have been worse…we were grateful to still have a kiln, and a building, however damaged, over it. I imagined the burning embers falling from the roof onto the structural timbers, burning through, and collapsing the whole building. Onto the kiln, which was still hot and would have stoked the fire. The chimney would fall…I shuddered.

Looks like you need to be pretty careful when you send a kiln over 2300 degrees. Hopefully we’ve learned this lesson well enough to build the roof back up and protect it adequately. Who knows, I might start listening to advice from other potters…

The pots from the firing did indeed turn out well. It was almost worth it.

3 thoughts on “An (Almost) Disaster”